OK, so this post’s title is tongue-and-cheek. ‘Cause this a blog about COOKING and WRITING, though Leah and I did have a pretty fun time in Minneapolis last week. So here’s a few more pictures from the trip, and explanations that go with them. 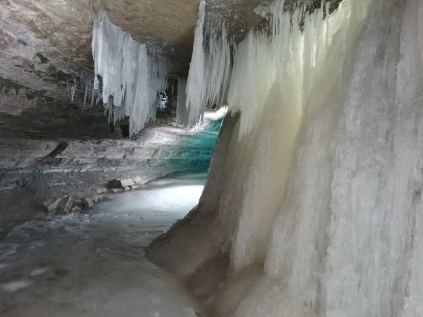 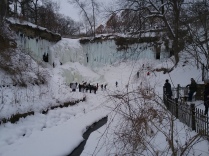 Again, the highlight of our short vacation was definitely the frozen waterfall. The only thing that has amazed me more in nature, I think, is the time when I took a trip to a South Korean island and very randomly saw some bioluminescent plankton. The area wasn’t apparently known for it, which make it all the more special—a complete surprise. As my friends and I sat on the beach at night, for hours, the waves broke and lit up in shades of blue and green. Honestly, I think that an ice cave gives that a run for its money. 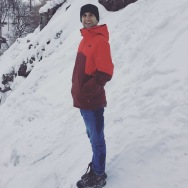 Hiking in the snow is always fun, and I only wish we’d been able to snowshoe or ski. That, I think, will happen on a future trip. The friends we visited told us about Book Across the Bay, a ten mile race across the frozen Lake Superior. Unfortunately, it was all “booked up” when we were in town, though I’d love to do it in the future (I hope you appreciated that pun). We played on some frozen lakes, on a small scale, but racing across a Great Lake at night? Very cool.

Swing dancing was a blast, and as mentioned before, this is a skill that’s paid off immensely as life has progressed. I first learned to swing dance while attending Chapman University, where it was a popular way to fulfill a P.E. credit. It later led to fun meetups and dates, and the best way I made friends while living in Seoul (swing dancing in Korea is huge). Like at many swing dancing events, there was a fun way to take pictures, as well as a very welcoming crowd. 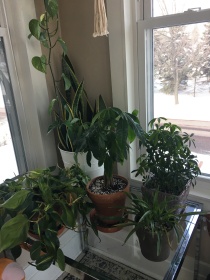 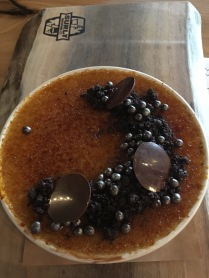 And also, we made our own food, and admired one of our host’s plants. Leah loves plants, and these two were kindred spirits. Additionally, we hiked to a very old, art deco water tower? That doesn’t fit with the plants much, but it doesn’t really fit with anything. ANYWAY, Minnesota is a fun state, and though I think I can speak for both Leah and I by saying that the weather in North Carolina in general is more pleasant, it’s great to run around in the cold for an extended weekend and that was our trip.

4 thoughts on “In Defense of Cold Vacations: Because They Give You Material for a Lifestyle Blog”