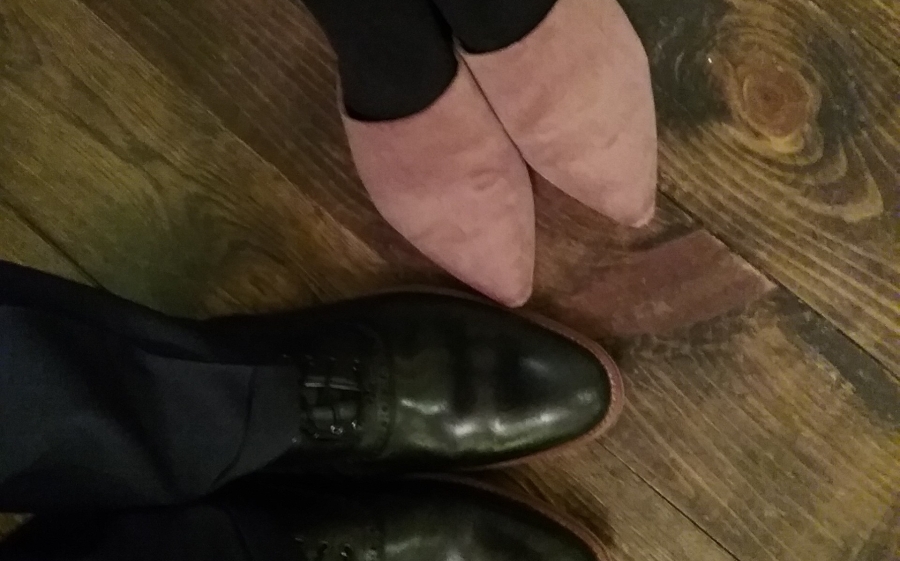 What else happens when you are slated to be in a wedding? Well, besides getting besieged with snow and getting trapped with the wedding party in a hotel, you may also go to get a haircut in the days before. You’ll want to look your best, right? And then you’ll just happen to get the worst haircut of your life.

What is pictured here is my actual haircut, which I noticed was a bit asymmetrical after I got home and took a shower. In my experience, towards the end of a haircut the barber or stylist usually asks if you want gel in your hair or not. I almost always say “no,” because new haircuts are itchy and I want to wash my hair after getting home. On Tuesday, however, the lady cutting my hair didn’t ask—she just put gel in my hair and turned me around and BAM! I thought it looked fine in the mirror. So she was sneaky. Needless to say, I needed to wear gel in my hair at the wedding, and I am continuing to do so as my haircut grows out. I will hand it to her though; I never heard a gasp or “whoops” when she chopped me—cool as a cucumber.

Some other interesting wedding-related occurrences: The hotel where we were staying was visited by “Zombie Claus.” I’m not 100% sure what Zombie Claus was, because I didn’t see him, but I can make a guess. I also met one of his minions, who is this guys here pictured on stilts. Unless he was Zombie Claus, though that doesn’t make a lot of sense to me. But anyway, if you were ever curious if The Nightmare Before Christmas was the only Halloween-Christmas mash-up, I guess it isn’t. And the Zombie Claus ambulance with an attached machine gun was pretty cool, I guess. Also, at the same time Santa visited the hotel, so there was competing Santa and Zombie Claus’s, and I’m not sure if the timing was intentional (if you want to see just how Christmas-upped our hotel was, read the previous post by clicking here).

Another item of note would be that the wedding was in a converted barn, and it was beautiful. I’m starting to think that churches are… shall I say, close to the least-interesting places to have weddings? The service was still religious, and the married couple’s pastor who conducted the ceremony did a terrific job. On a side note, he did pronounce the wedding, but forgot the exchanging of rings, but it was hilarious and is just really made the ceremony personal (he did a great job). But to return to locations, Leah and I got married in a garden, and recently I’ve seen friends who were married in aquariums, museums, back yards, and I heard of an acquaintance getting married in a cave. I used to always think that weddings needed to be in churches, but now as an adult I appreciate all of the creativity I’ve seen in location-choosing.

Also, the wedding we attending had a glow-stick ceremony at the end, as well as bagpipes. Writing this down, it seems like an odd combination, but it was tasteful, and I guess common knowledge is that that throwing rice isn’t good, and is a pain to clean up if you’re indoors! So we did glow sticks and they looked great, especially since the bride and groom walked out at night. The fact that the wedding was in the winter was also a neat touch, and the bridesmaids even wore faux-fur wraps. All-in-all, this last weekend was a great time, and I guess I’m actually looking forward to future friends getting married. But only if it’s as original as this one, and in a snow storm. Ha!

2 thoughts on “Surviving the Snowpocalypse / We Were in a Wedding, p. 2”